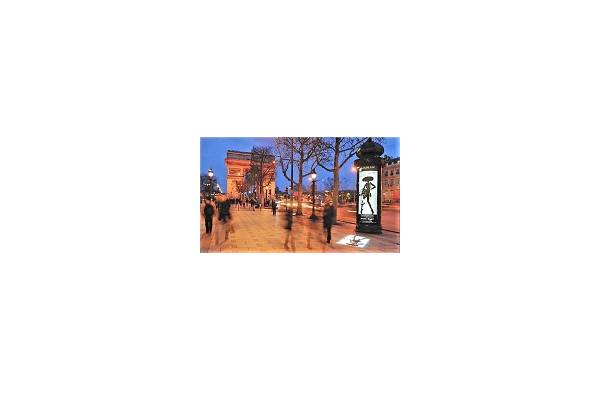 Just as Wallace fountains or Guimard aedicules help to define the Paris we know and love, Morris columns also form an integral part of this great city’s emblematic and unique urban landscape.

These columns originate from Berlin, where flyposting was at one time known to pose a problem. It was in 1845 that German printer-publisher and inventor Ersnt Litfaß found a way to curb the excessive amounts of flyposting around the city. Litfaß columns were soon taken over by Gabriel Morris, another printer who specialized in billposting on the numerous Parisian spectacles of this era. The first 100 Morris columns were installed around Paris in 1855.

These cylindrical columns can hold almost four square meters of Parisian cultural offers and advertisements. The structures are iron cast in green, allowing them to easily blend into the Parisian landscape. The whole of urban “furniture” thereby adopts this hue.

Typical of the eclectic style of the 19th century, this column is designed with a hexagonal canopy and ornamented with six lion noses at the angle. A dome adorned with an arrow and acanthus leaves rests atop the whole structure.

It is worth noting that the interior of the column is hollow, allowing for storage of city maintenance equipment.

Supported by the police commissioner of Paris, The Morris column project was so welcomed that about ten of these columns were installed on the great boulevard of the city alone. Between 1868 and 1870, approximately 451 Morris Columns in total were installed in Paris. Today, more than 500 exist.

This website uses cookies to improve your experience while you navigate through the website. Out of these, the cookies that are categorized as necessary are stored on your browser as they are essential for the working of basic functionalities of the website. We also use third-party cookies that help us analyze and understand how you use this website. These cookies will be stored in your browser only with your consent. You also have the option to opt-out of these cookies. But opting out of some of these cookies may affect your browsing experience.
Necessary Always Enabled
Necessary cookies are absolutely essential for the website to function properly. These cookies ensure basic functionalities and security features of the website, anonymously.
Functional
Functional cookies help to perform certain functionalities like sharing the content of the website on social media platforms, collect feedbacks, and other third-party features.
Performance
Performance cookies are used to understand and analyze the key performance indexes of the website which helps in delivering a better user experience for the visitors.
Analytics
Analytical cookies are used to understand how visitors interact with the website. These cookies help provide information on metrics the number of visitors, bounce rate, traffic source, etc.
Advertisement
Advertisement cookies are used to provide visitors with relevant ads and marketing campaigns. These cookies track visitors across websites and collect information to provide customized ads.
Others
Other uncategorized cookies are those that are being analyzed and have not been classified into a category as yet.
SAVE & ACCEPT