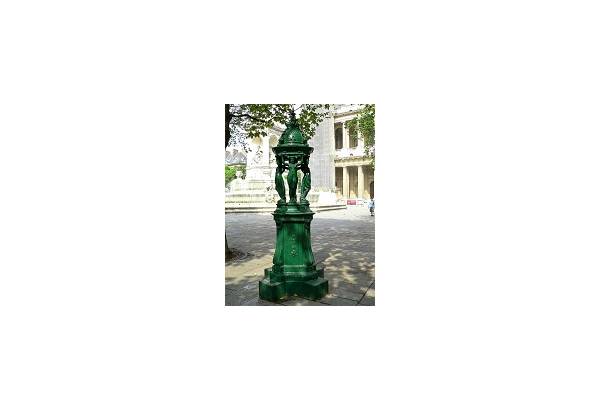 Wallace fountains (“Les Fontaines Wallace”) are drinking fountains made of green cast iron that one can find just about everywhere in Paris. The fountains not only allow everyone a drink of water when needed, but they lend unique and distinguished architectural detail to the landscape of Paris.

The history behind these fountains is actually quite similar to that of the Morris Columns. Between September of 1870 and January of 1871, Paris was besieged by Prussian troops and the city suffered from one of its most violent winters. Insurrection of the commune government resulted as rebellion rumbled among the people. During lengthy months, Parisians were tormented by sub-degree weather and extreme hunger, and many animals from the Paris Zoo were eaten out of desperation. Thirst also beleaguered the city since the aqueduct had been destroyed.

The impoverished were the first to suffer from these extreme challenges. Lack of access to drinkable water, and the price to obtain it, became alarming. It was in this context that English collector Richard Wallace emerged. He had been settled in Paris for several years and was one of the first to become aware of this problem. As a generous donator, Richard Wallace offered many free water fountains to the city, allowing everyone, rich or poor, to have access to potable drinking water.

For Wallace, the objective was dual. He wanted not only to give access to free drinkable water to one and all, but also to embellish Paris. Therefore, much like the Morris columns, the design of these fountains needed to be harmonious with the urban landscape. It was Wallace’s wish that the fountains be practical, but also perceived as a work of art. He called upon sculptor Charles-Auguste Lebourg, with whom he had already worked several times, for the project.

Smelt in Haute-Marne, the fountains are realized to four different models representing kindness, simplicity, charity and sobriety. Each of the four designs is subtly different, but all include a base design with four mounted caryatids upholding an ornate dome.

The first Wallace fountain was installed in 1872 on the Boulevard de la Villette. Today, one can still find almost a hundred fountains in existence, operating just as they did the very first day they were installed, supplying drinkable water of the same quality as the first. You can enjoy free drinking water from these iconic fountains throughout Paris from March 15th to November 15th each year.

This website uses cookies to improve your experience while you navigate through the website. Out of these, the cookies that are categorized as necessary are stored on your browser as they are essential for the working of basic functionalities of the website. We also use third-party cookies that help us analyze and understand how you use this website. These cookies will be stored in your browser only with your consent. You also have the option to opt-out of these cookies. But opting out of some of these cookies may affect your browsing experience.
Enregistrer & appliquer